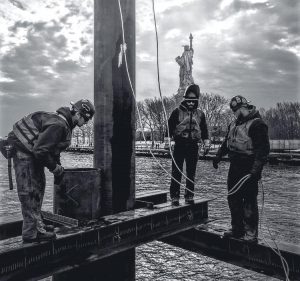 Simpson & Brown got its start when the Brown brothers brought their experience in waterfront construction to the U.S. from Liverpool, England, in 1671. By 1731 they had started a harborside construction business in Boston. The abundance of fine timber and coastline moorings lured them to the coast of Maine where they built and repaired roads, water lines and docks in addition to constructing buildings.

In 1831 they moved to New York where Cornelius Vanderbilt was financing a construction boom. There, the company established a reputation for quality in the extremely competitive New York/New Jersey waterways construction business. The Brown’s family construction business built bridges, ferry slips, bulkheads, docks, piers and jetties from New York to Philadelphia. At the dawn of the 20th Century, Charles R. Simpson, a Princeton-educated engineer, joined the firm and became President. The company became known as Simpson & Brown, offering deep foundation, and marine & civil construction services, as it still exists today.

We're not around right now. But you can send us an email and we'll get back to you, asap.